Highlands West is Scotch Creek’s flagship Clayton Valley lithium project. The project spans across 318 placer claims, totalling 6,360 acres, and is located on the southeast side of southern Clayton Valley. The property can be accessed by paved roads from Tonopah and Goldfield as well by the paved state route 265 through Silver Peak, the active lithium brine mine in the basin. 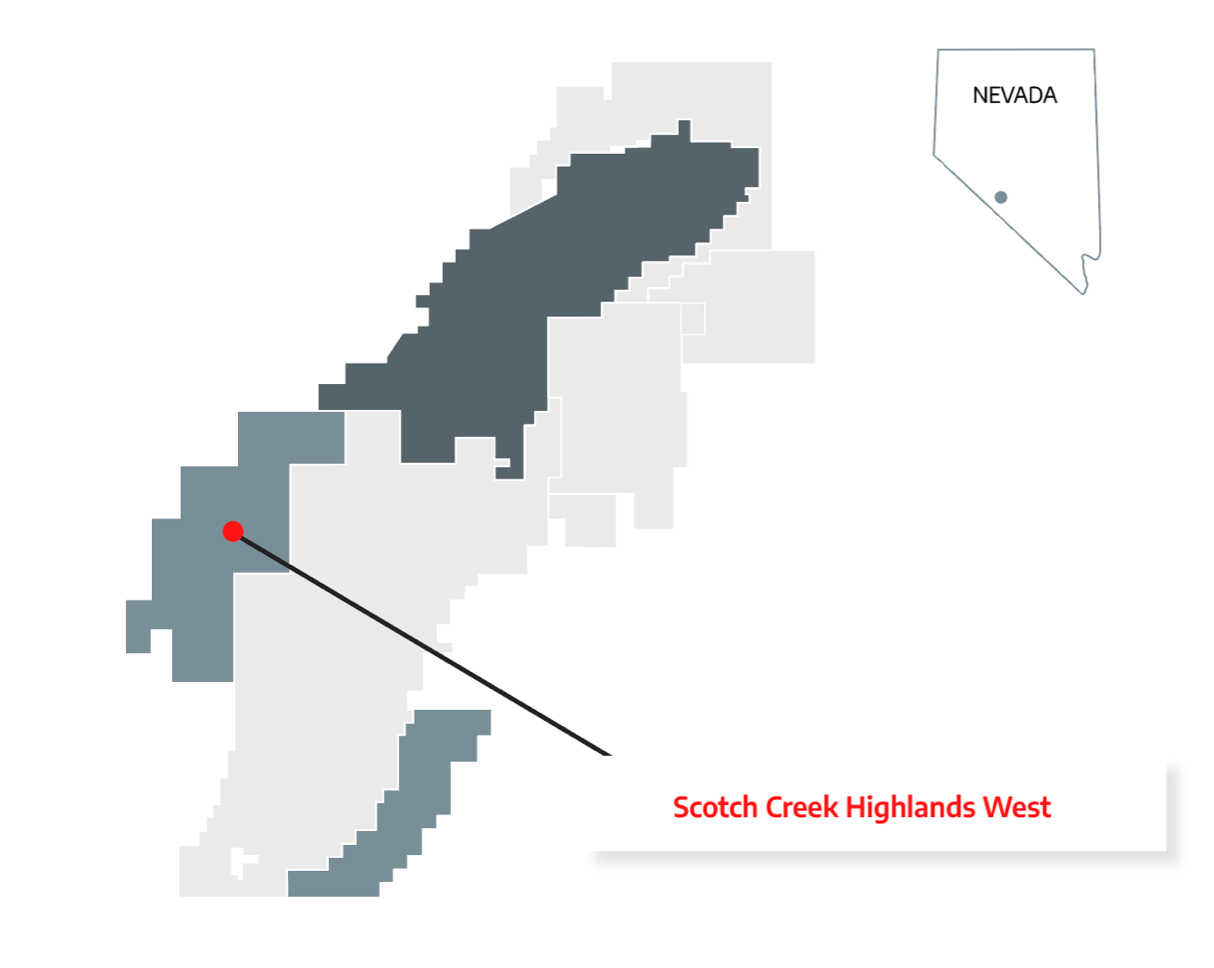 In area of known lithium resource

The Highlands project is situated amongst many top-tier exploration companies such as Pure Energy, Spearmint Resources, Nickel Rock Resources and is bordering Albemarle’s Silver Peak mine; the only producing lithium mine in North America. Pure Energy has already entered into an agreement for lithium production, while Spearmint Resources has recently completed its drill program in November and announced high-grade lithium intercepts, along with Northern neighbors Nickel Rock just finished phase one drilling in April on their lithium clay project.

Cypress Development Corp has already completed a Preliminary Feasibility Study and their open pit design and mining plan project a 40-year mine life, at a minimum and have also just closed a $23 million dollar bought deal financing. 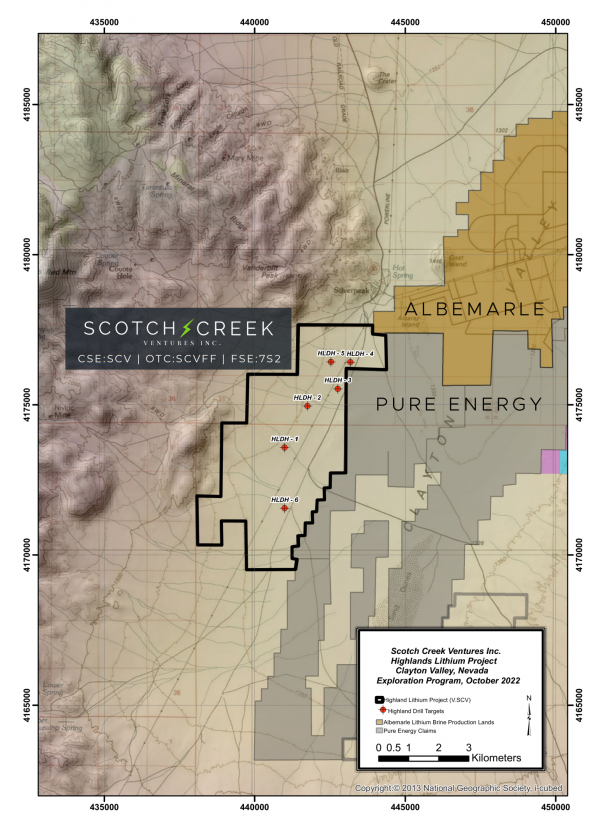 The Highlands Lithium project is within the southeastern portion of the Clayton Valley and is contiguous with lands owned by Pure Energy Minerals and Albemarle Corp. The valley contains a thick section of lake-bed sedimentary rock units that were deposited within paleo lake Esmeralda, a closed basin of late Miocene to recent age. Active faulting continues to drop down the basin against the basement rocks of the surrounding mountain ranges.

The term “closed basin” refers to the nature of the basin in that water enters the basin from precipitation on the surrounding mountains. The waters are trapped in the basin and have no rivers exit the basin, thus it is “closed”. Evaporation from the basin over millions of years has concentrated lithium and other salts within ground and basin filling, volcanic ash-rich sediments creating a world-class lithium concentration in the Clayton Valley.

The Clayton Valley is a lithium brine district hosted within the Esmeralda Formation, a sequence of lake basin-fill rocks that contain zones of volcanic ash-rich stratigraphy and salty evaporite units. Regionally, these Esmeralda rocks are of late Miocene to early Pleistocene age, in the range of 1 million to 5 million years before present. The Albemarle brine production field at Clayton is sourced from weakly to non- lithified volcanic ash horizons which have high porosity. The brines are pumped from these porous units contained within the upper portion of Esmeralda Formation lakebed sediments of the Clayton. 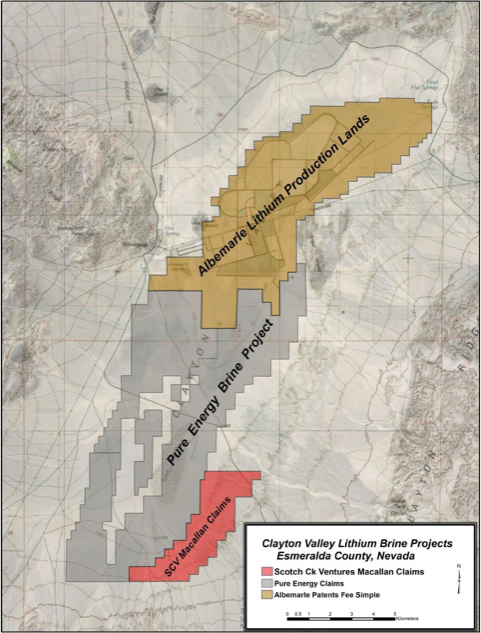 The presence of sandy, volcanic ash units within these rocks provides the host for lithium brine accumulation due to very high porosity. These units lack calcite cement and are seen as free-flowing “sugar sands” in the drill core. In these units, brine waters can accumulate in pour spaces within the sandy, ashy layers. Bounded above and below by low porosity, calcite cemented claystone, and mudstone, these meter to multimeter scale beds are the lithium brine resources of the Clayton Valley.

The Clayton Valley has the right topographic framework to receive lithium from groundwater and surface water sources and to hold it in place, permanently trapped in the basin. The hot, dry climate of the area has acted to continuously concentrate lithium through evaporation in a volcanic ash-rich, shallow lake environment.

The Highland property lies within a gently sloping terrain with bold, uplifted outcrops of both bedded volcanic ash and interbedded siltstone and volcanic ash of the key lithium host rock, the Esmeralda Formation. These outcrops are exposed immediately west of the property. The vast majority of the property is covered by slope wash, a fine-grained, silty unit that grades into the playa basin bottom along the east edge of the property. The terrain on the Highlands project is dominated by rocky, sandy outwash flats and by alluvial fans. The west margin of the claims is butted against a steep-sided uplift of bedded volcanic ash.

Scotch Creek Ventures Highland claim block sits on the western margin of the Clayton Valley in a position that has outcropping Esmeralda Formation and bedded volcanic ash units exposed immediately west of the claim block. These units are both lithium source rocks as well as lithium brine trap-rocks. These units have been faulted down to the east and are interpreted to lie in the subsurface of the Highland placer claims. 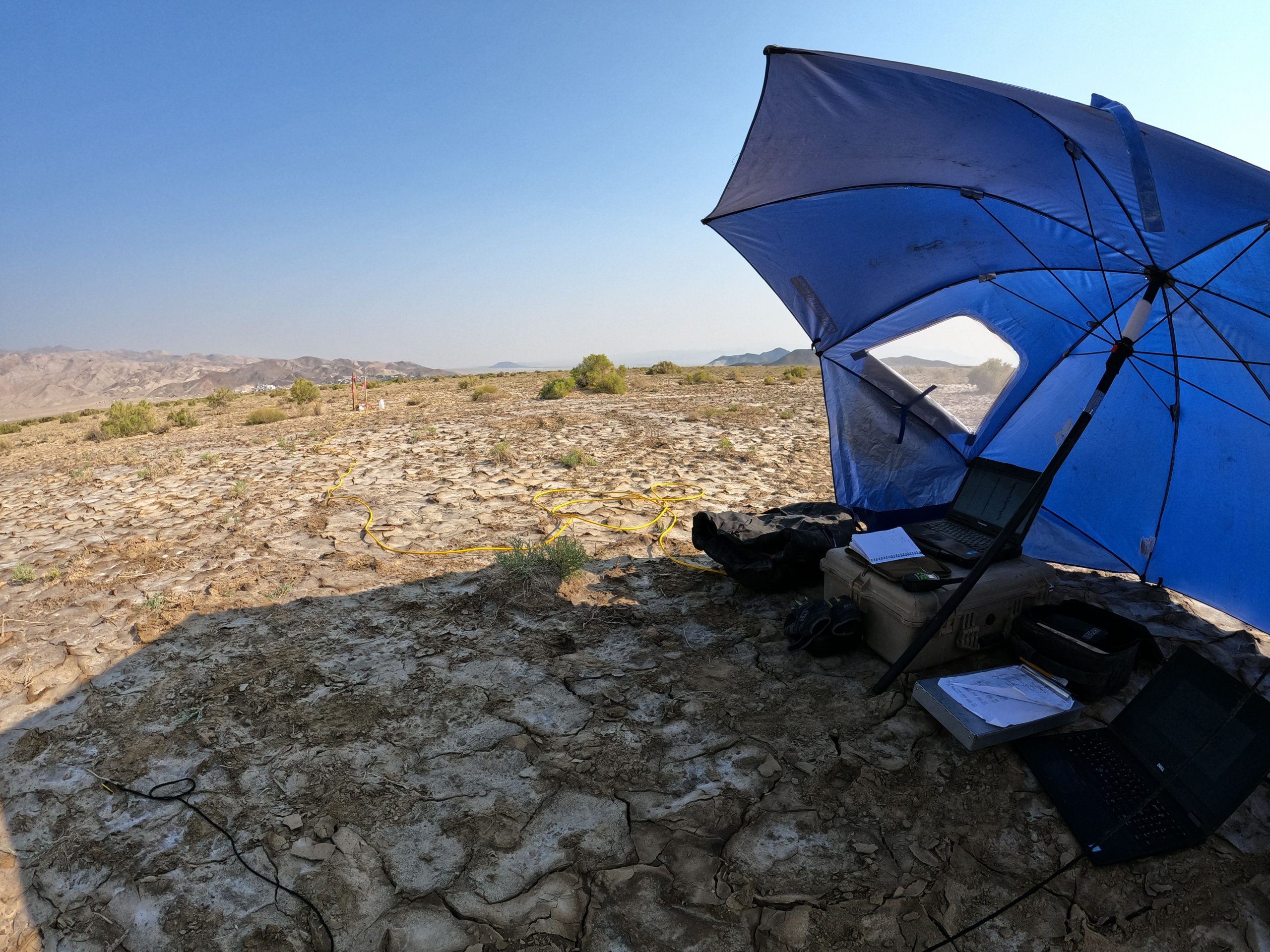 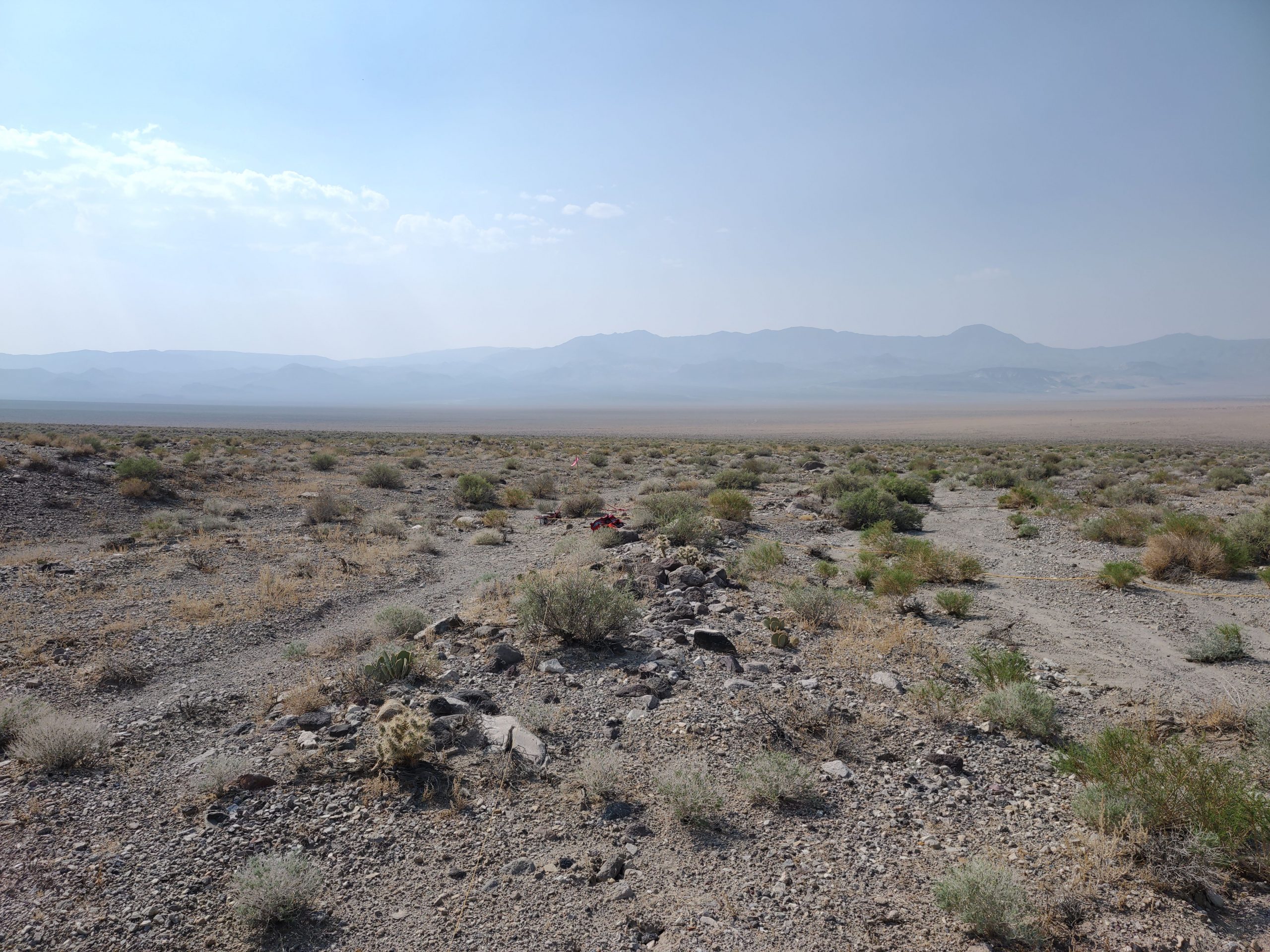 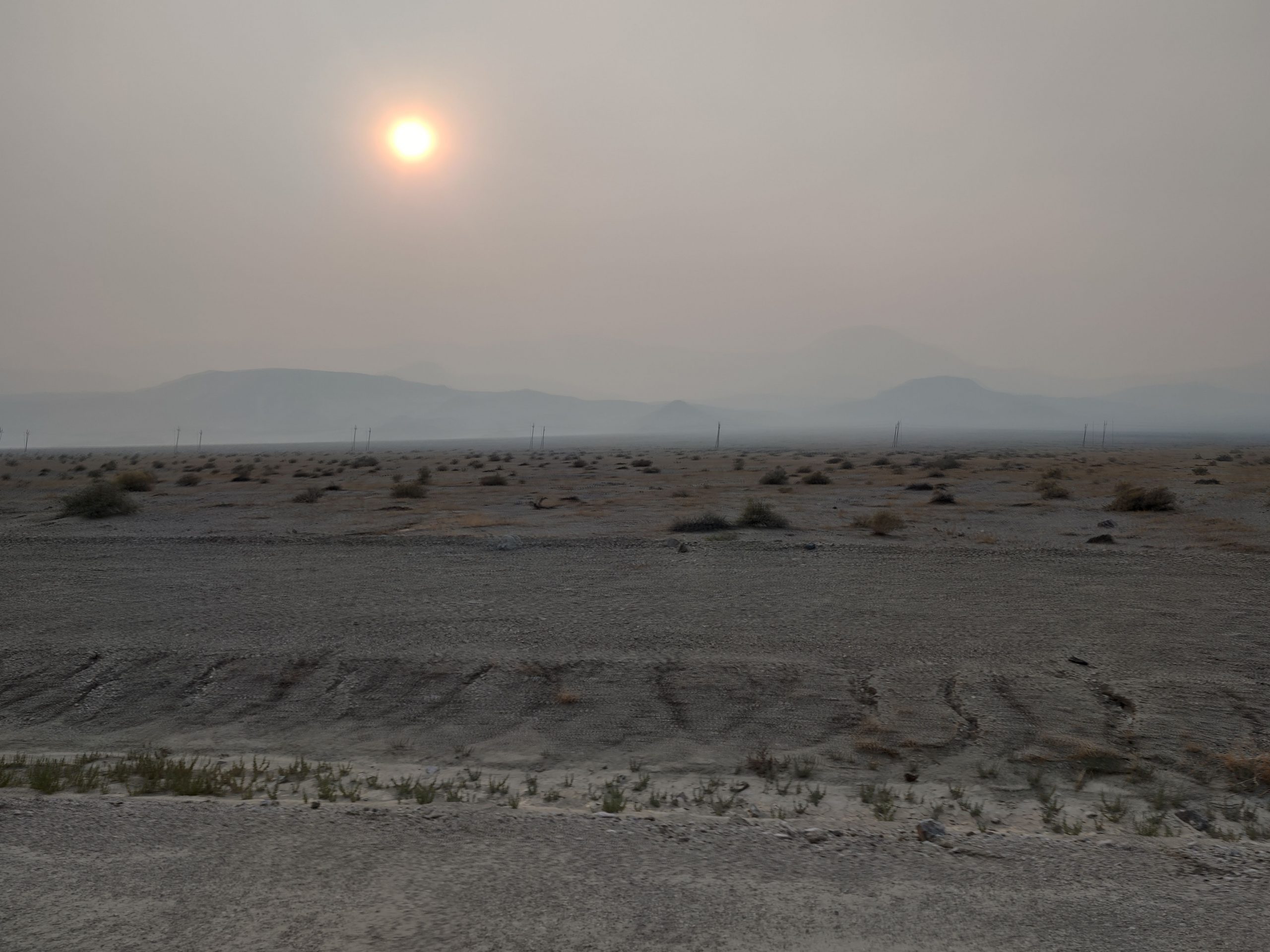 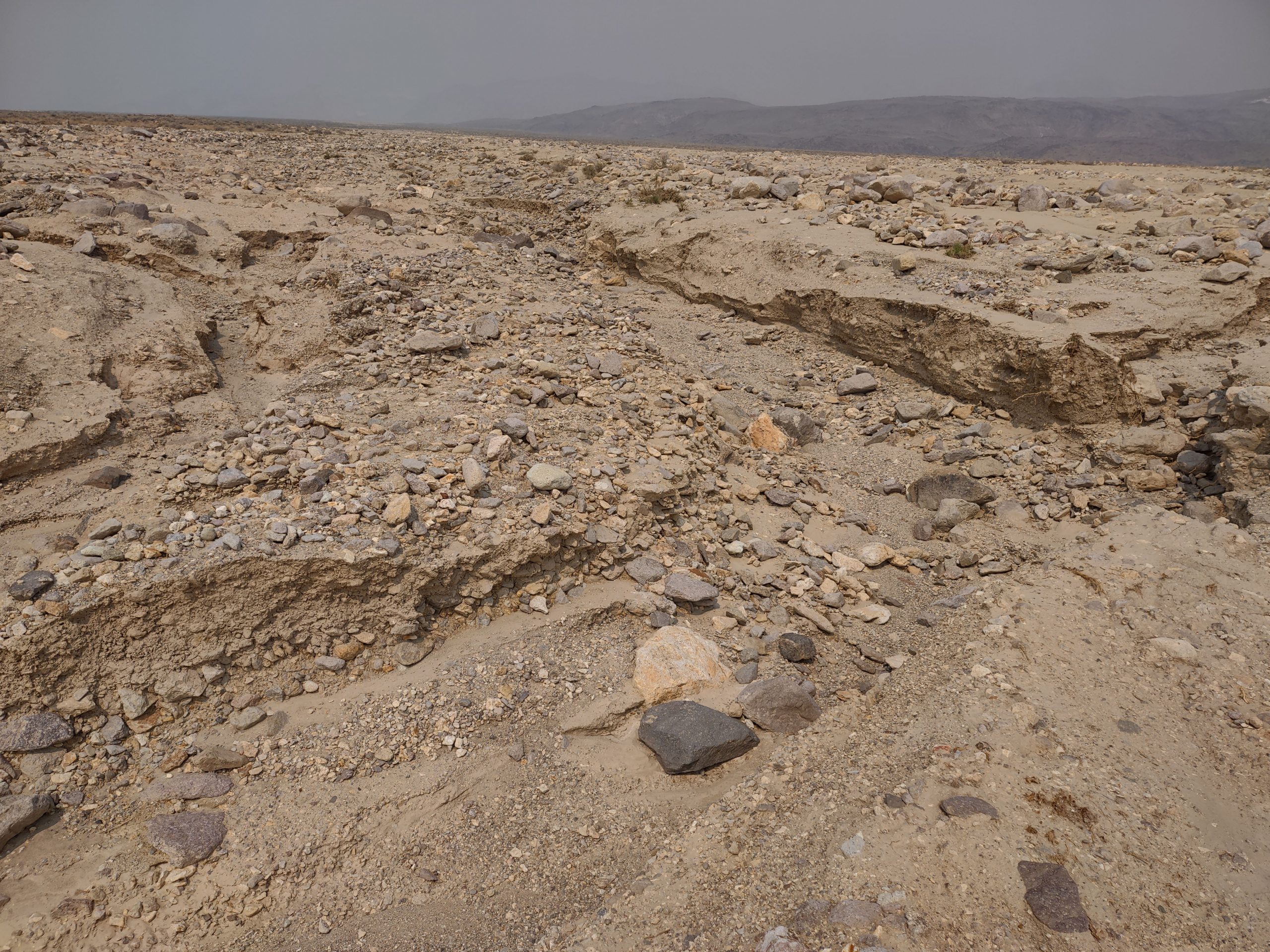 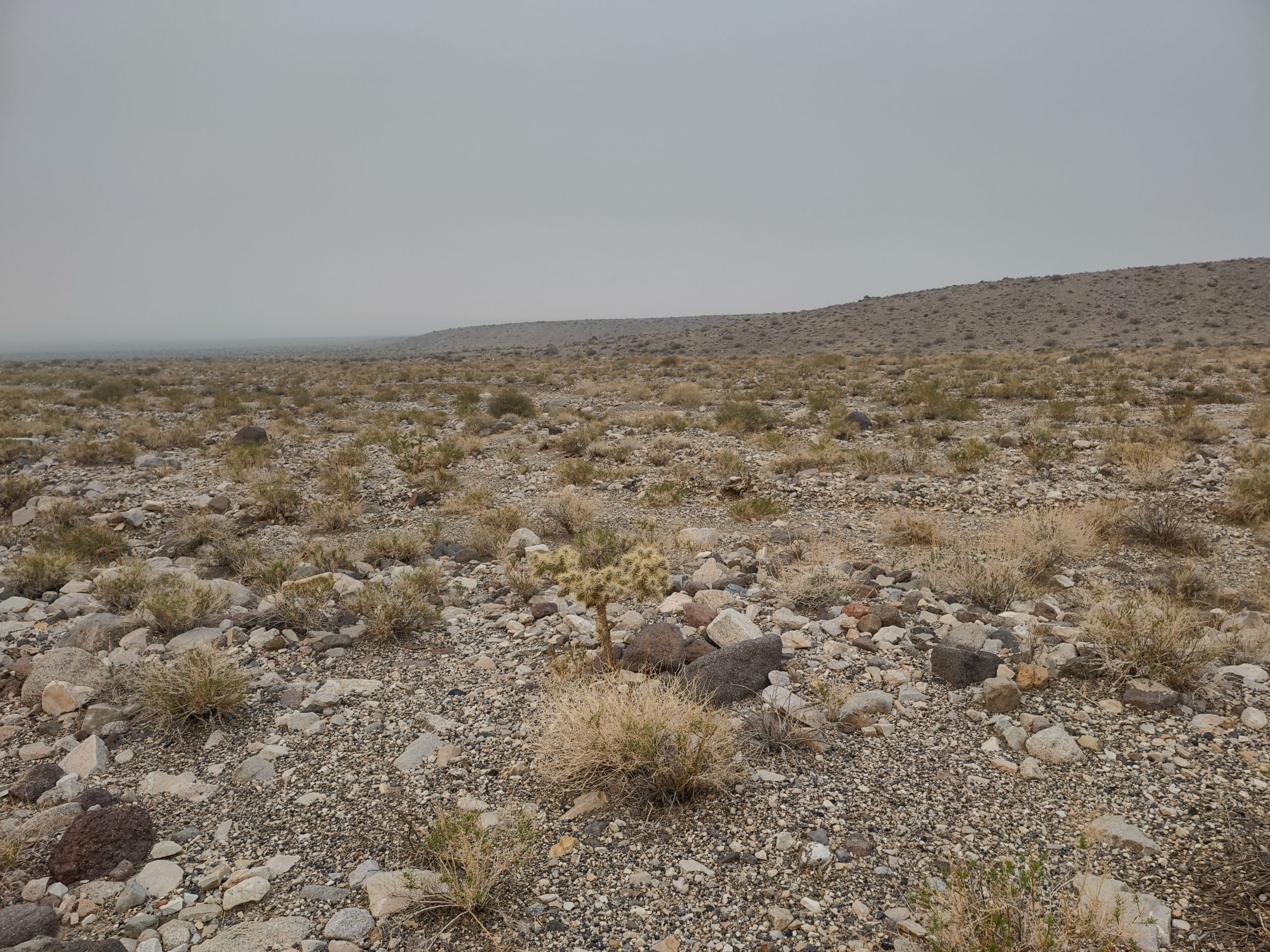 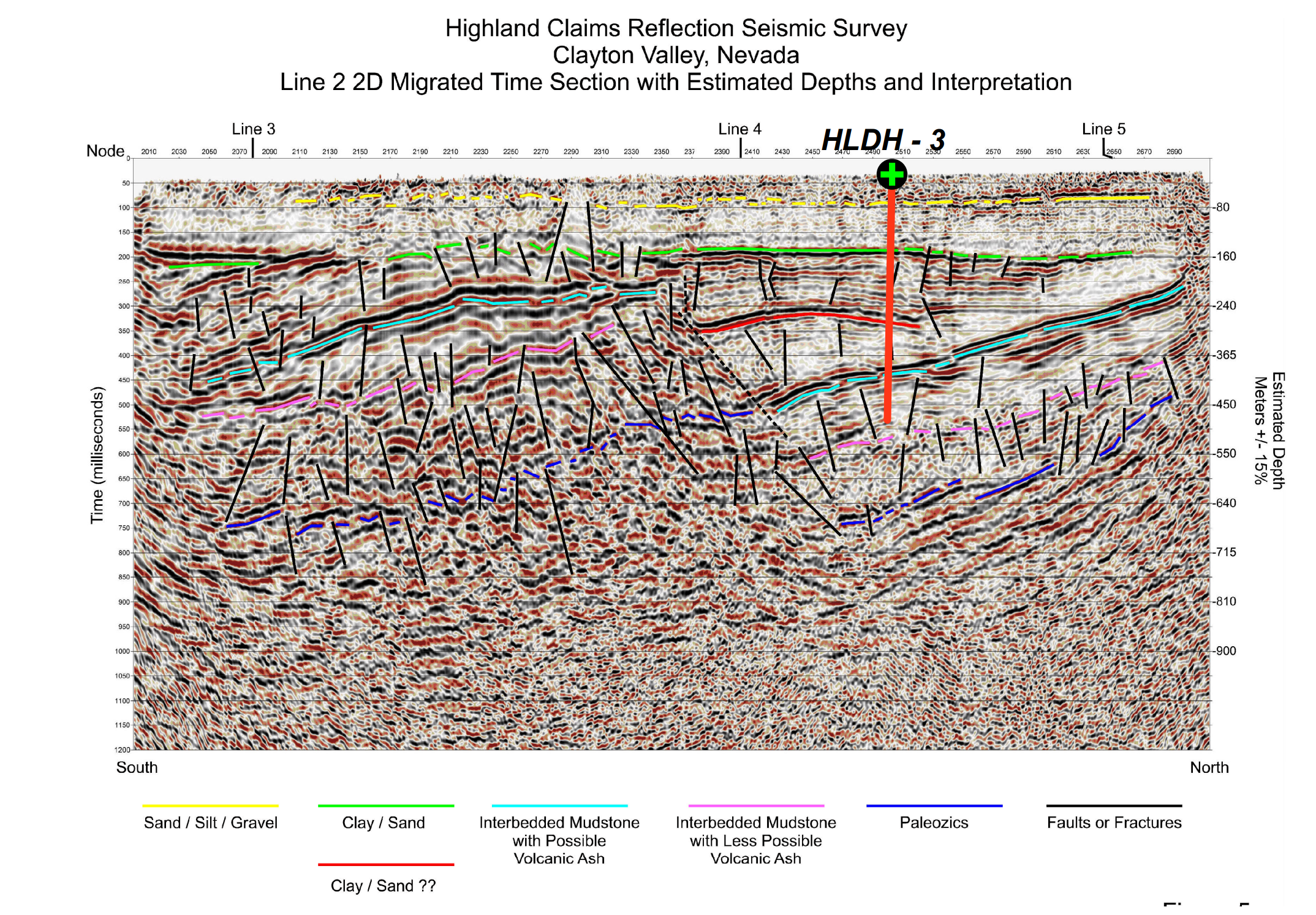 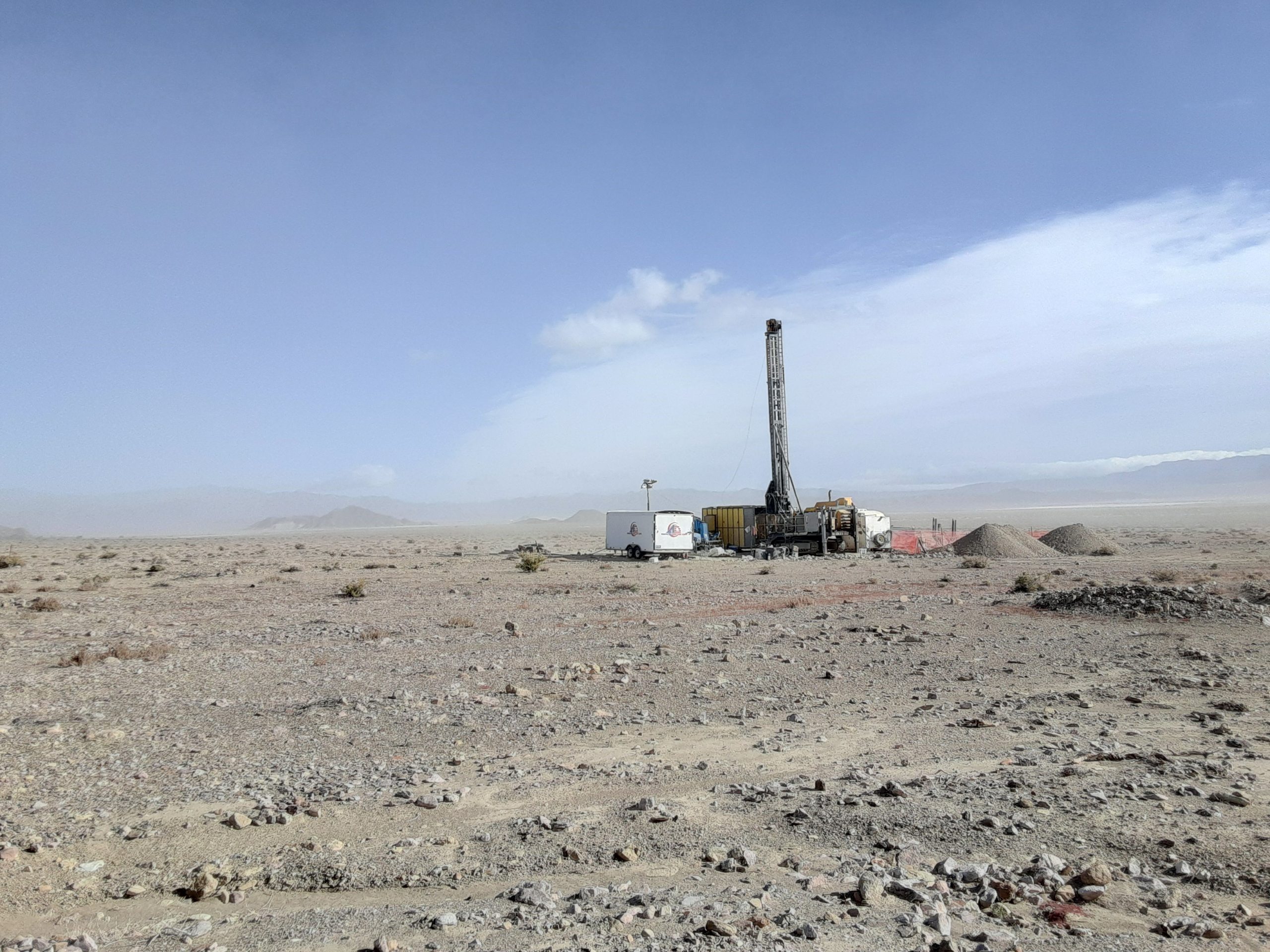 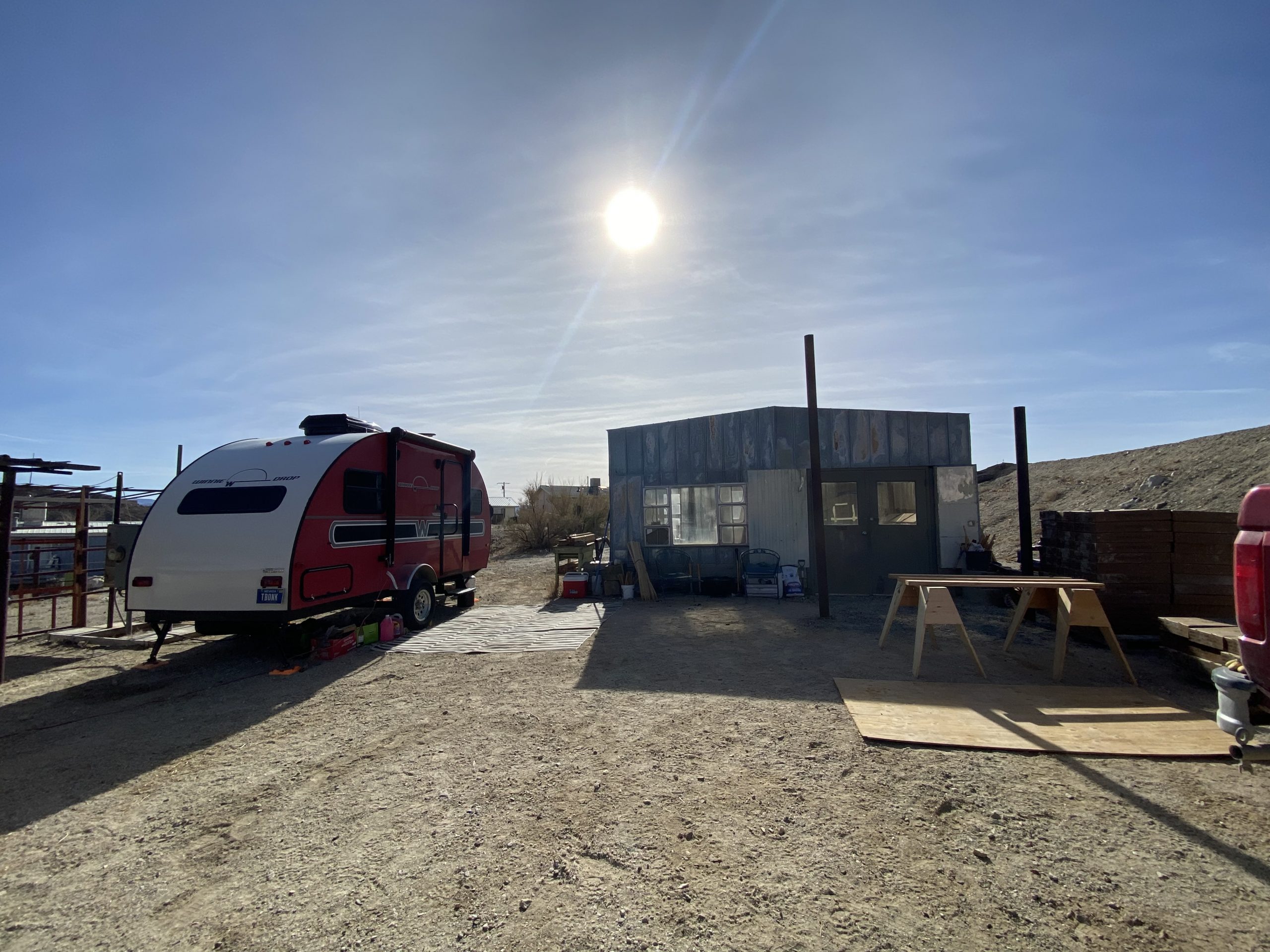 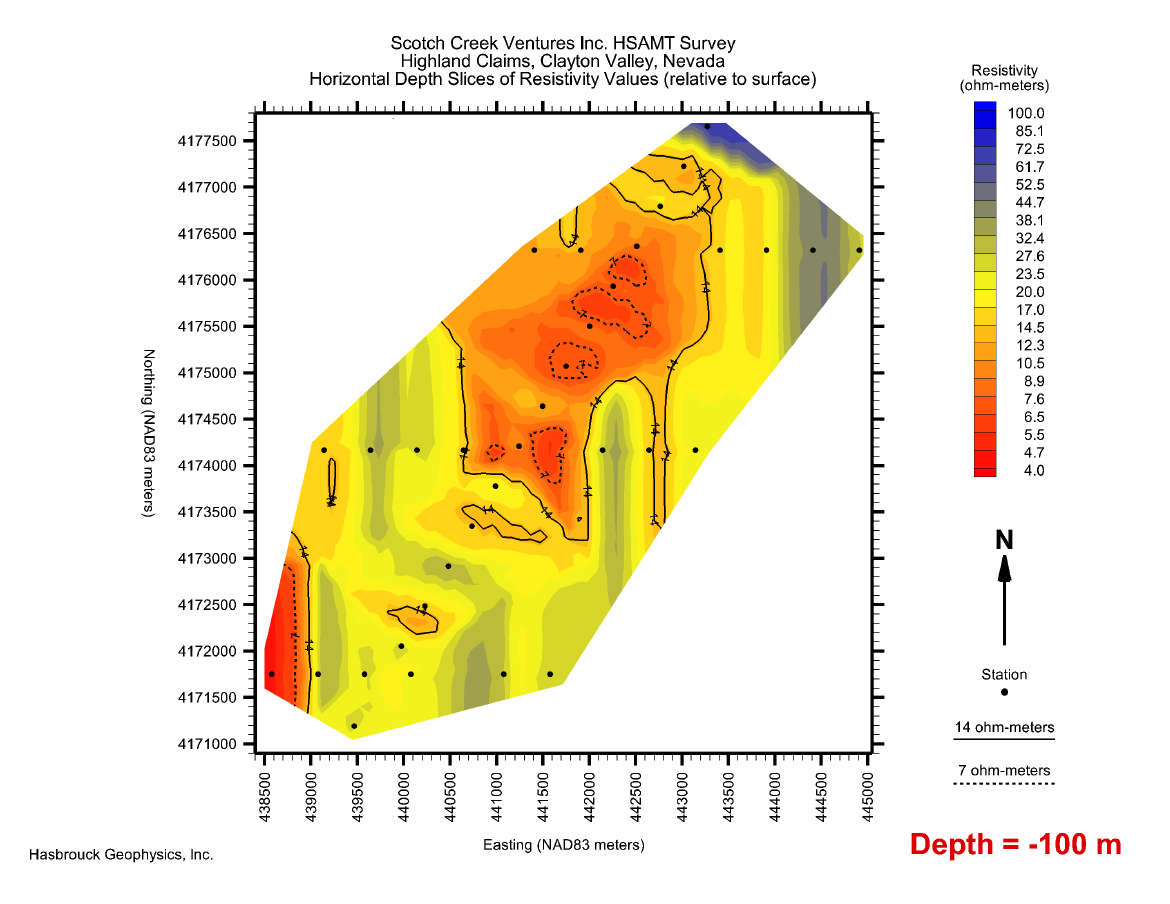 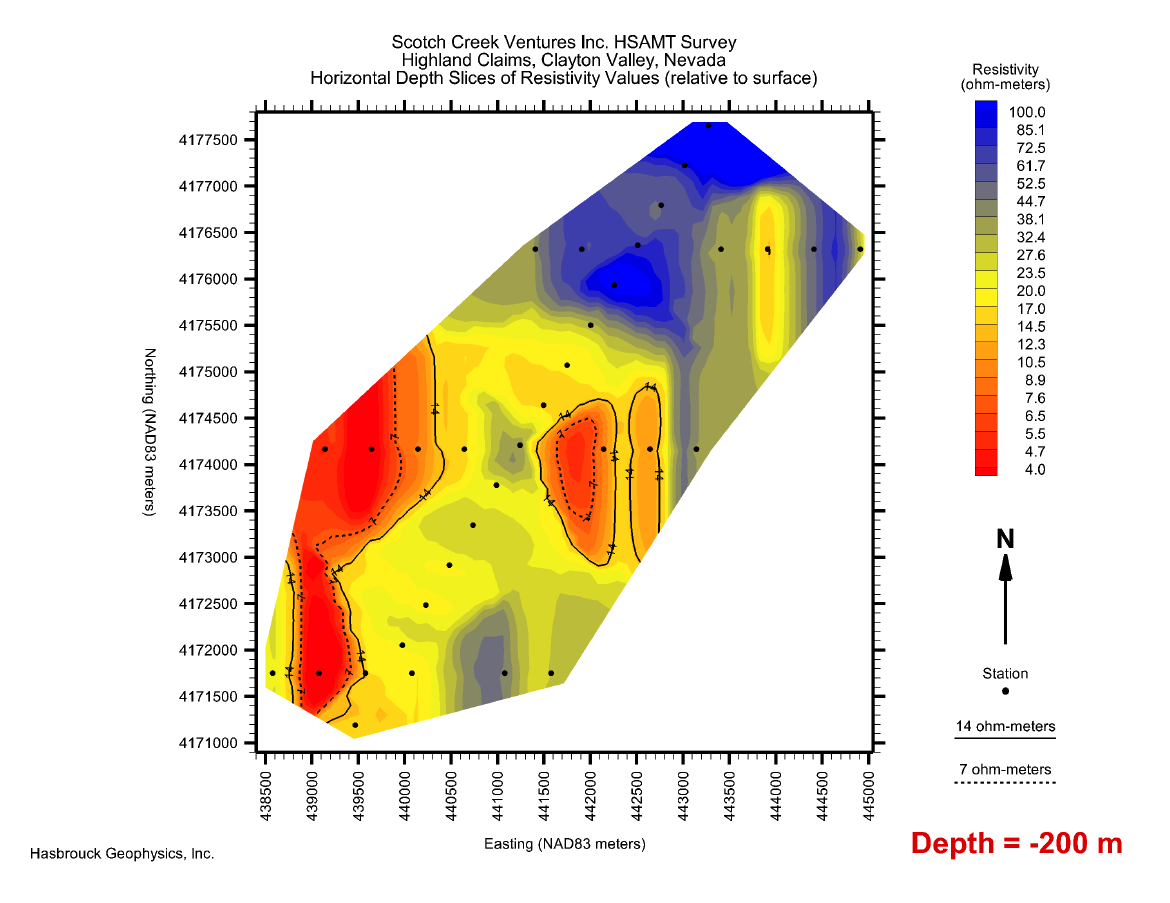 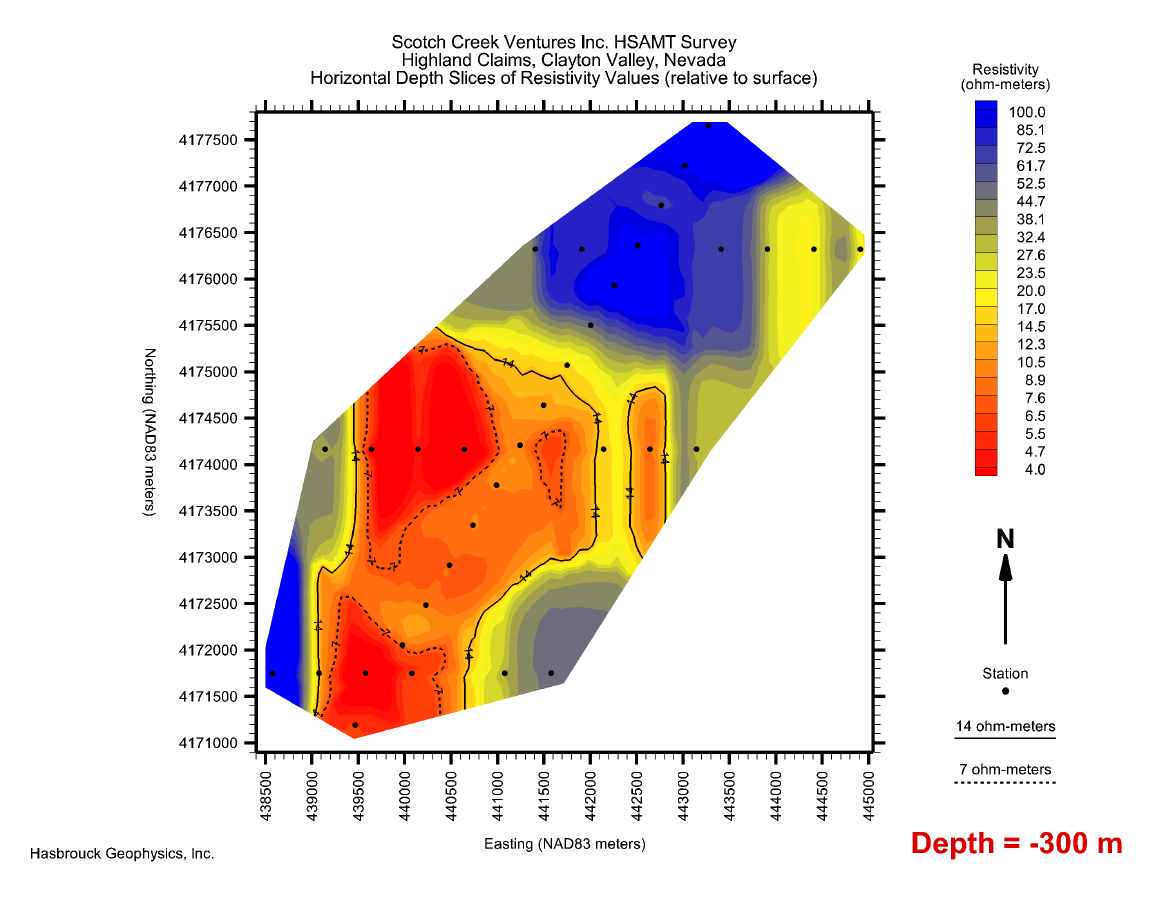 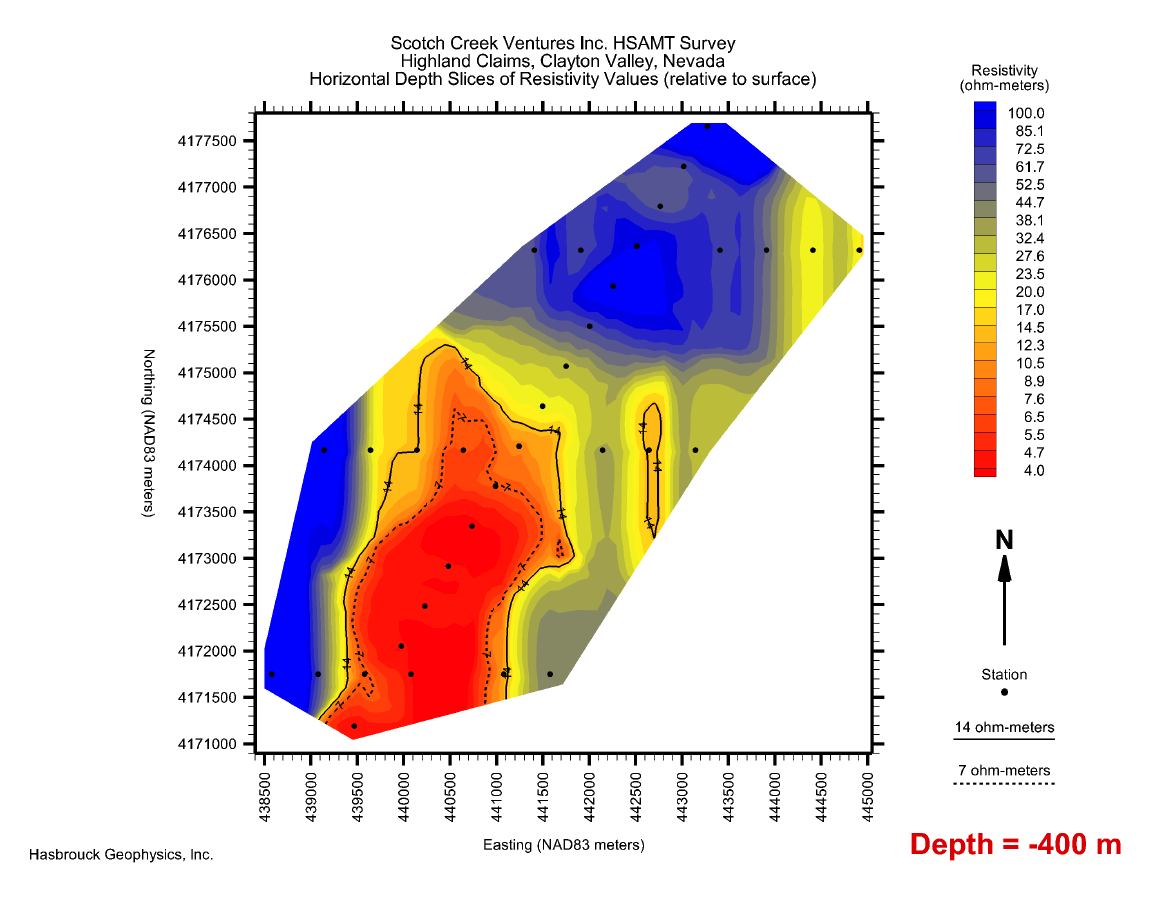 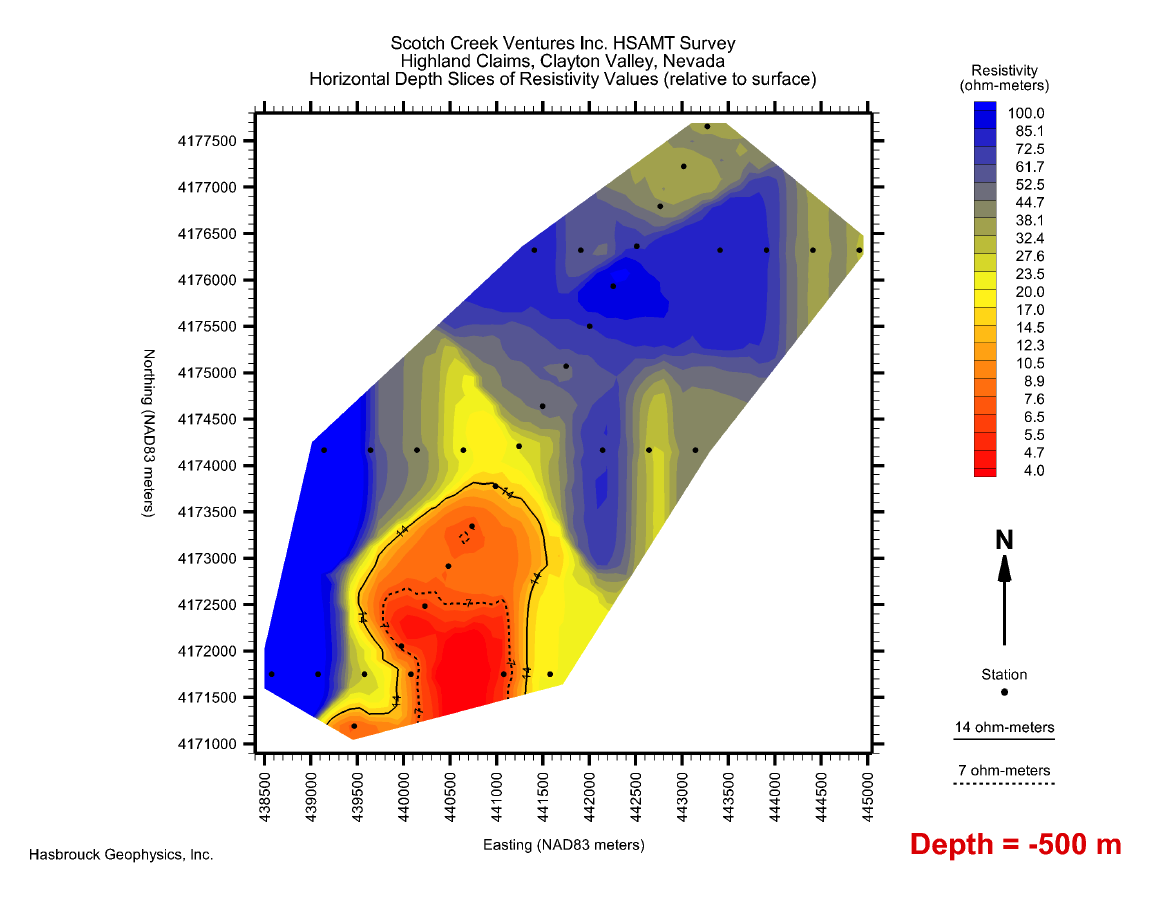 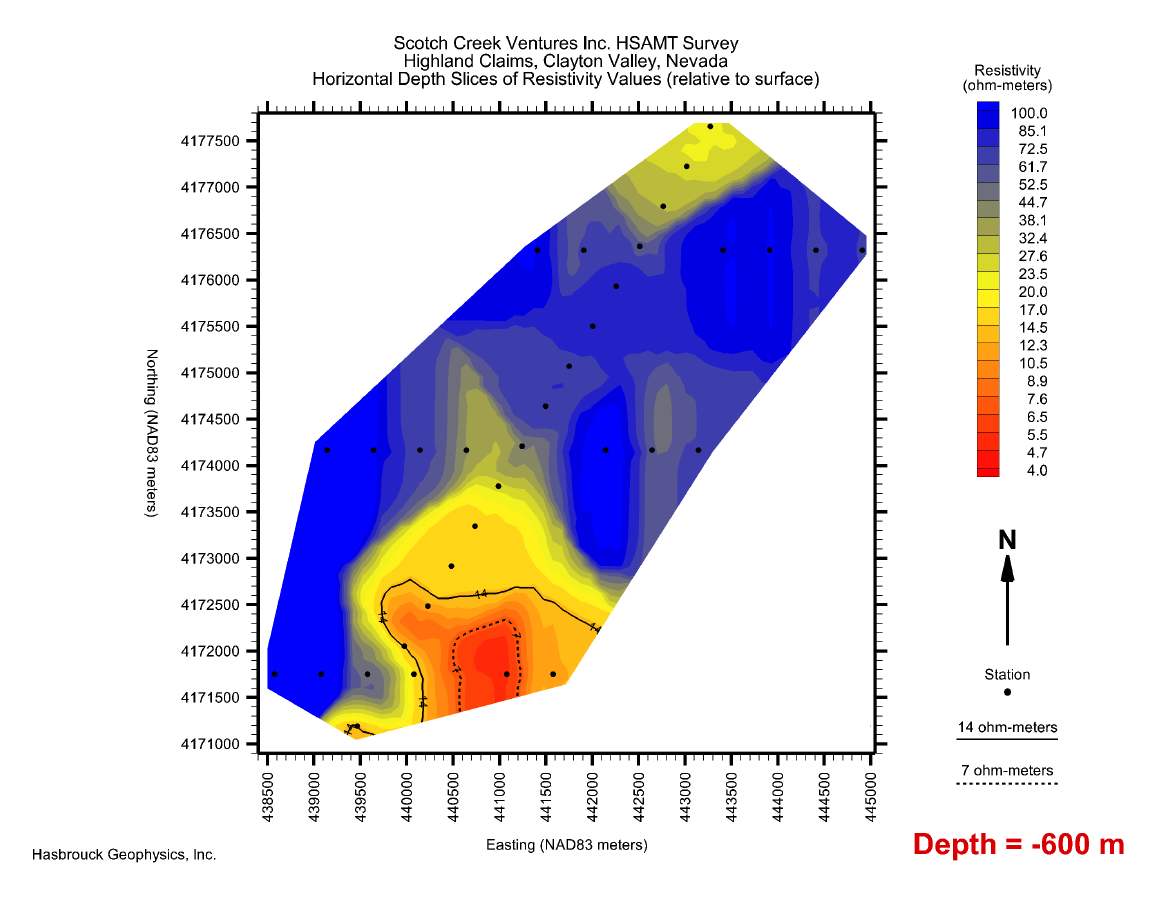 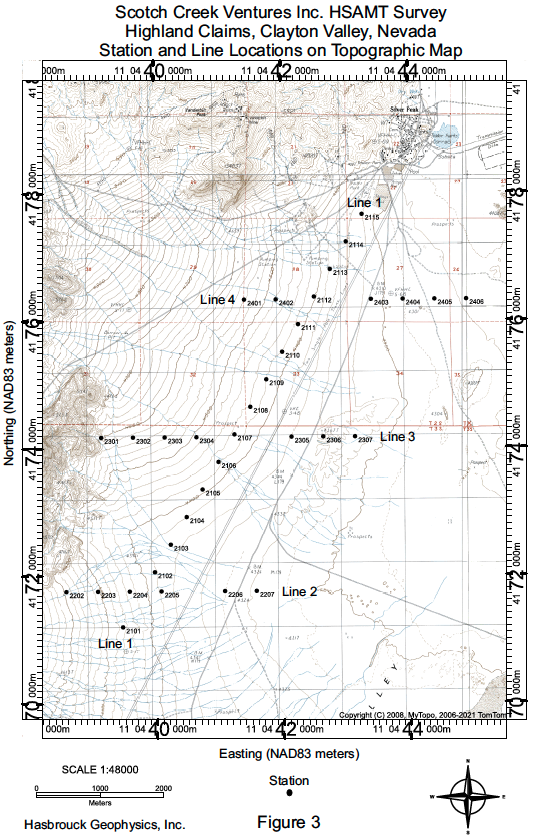 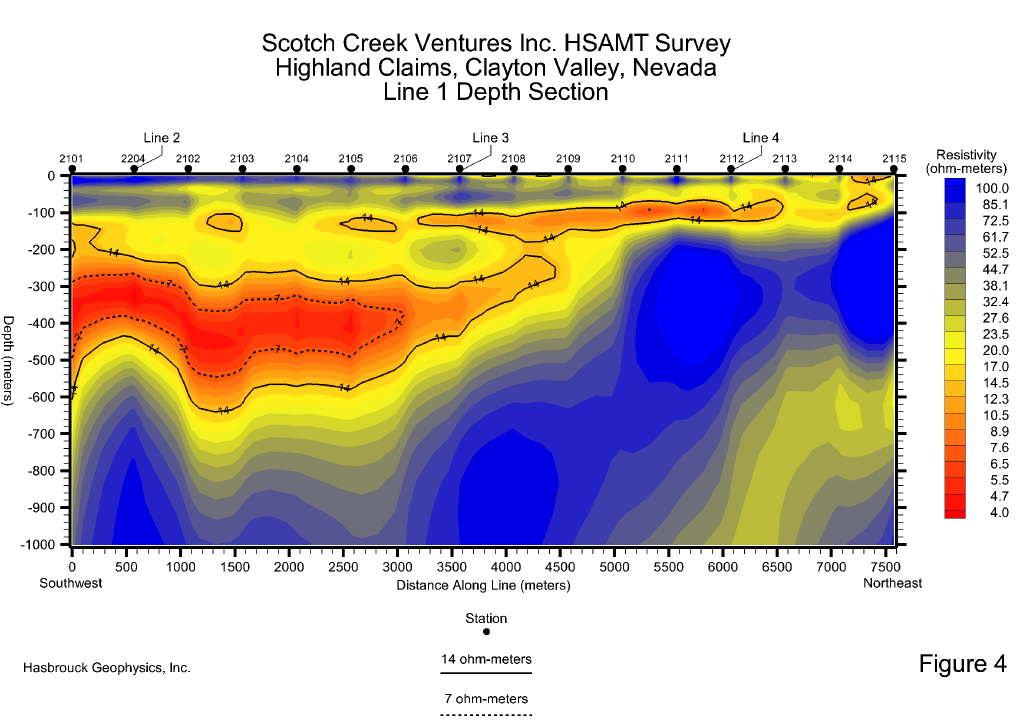 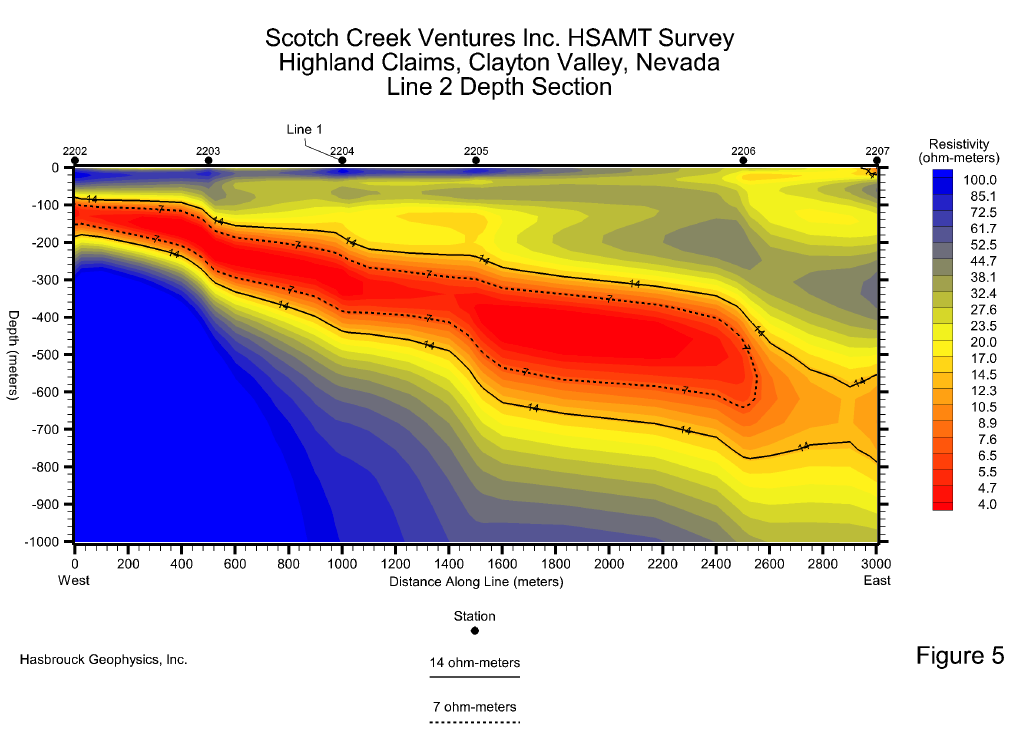 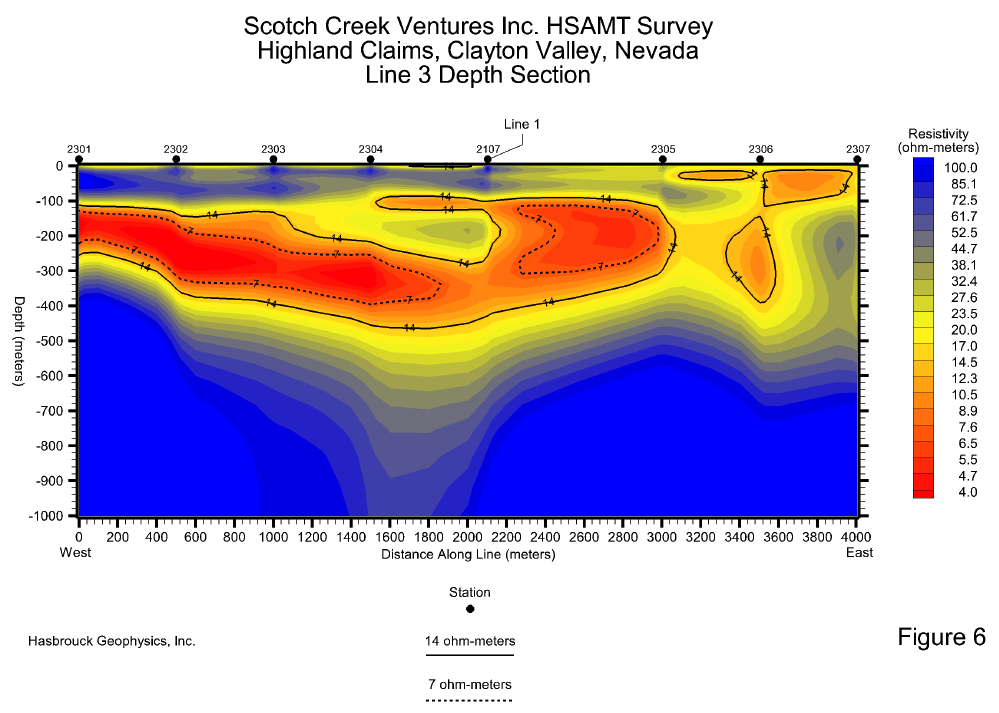 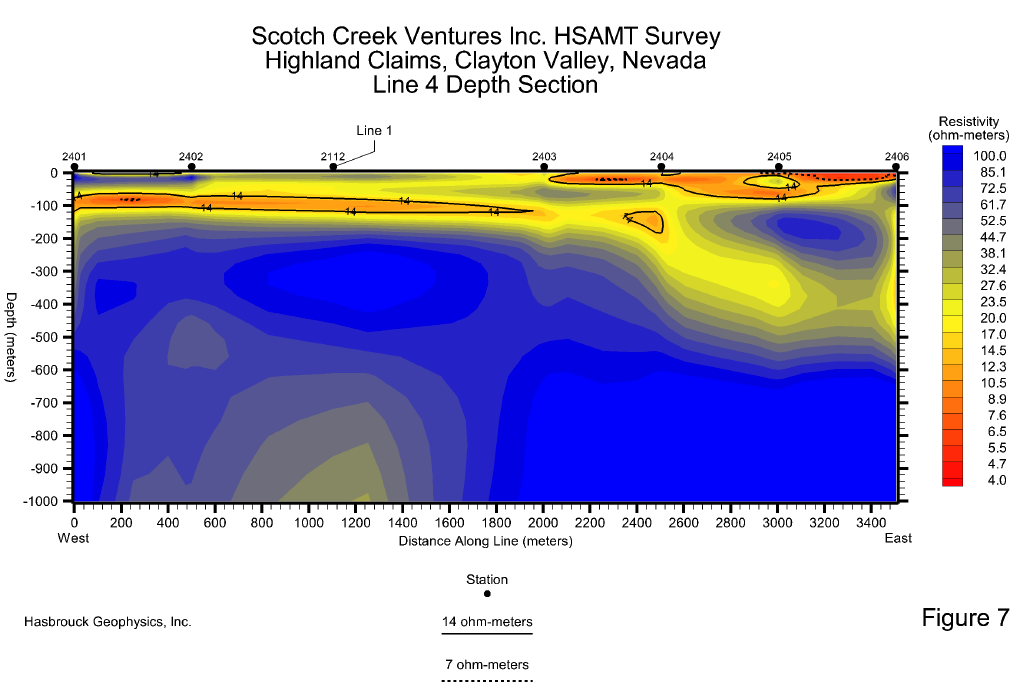 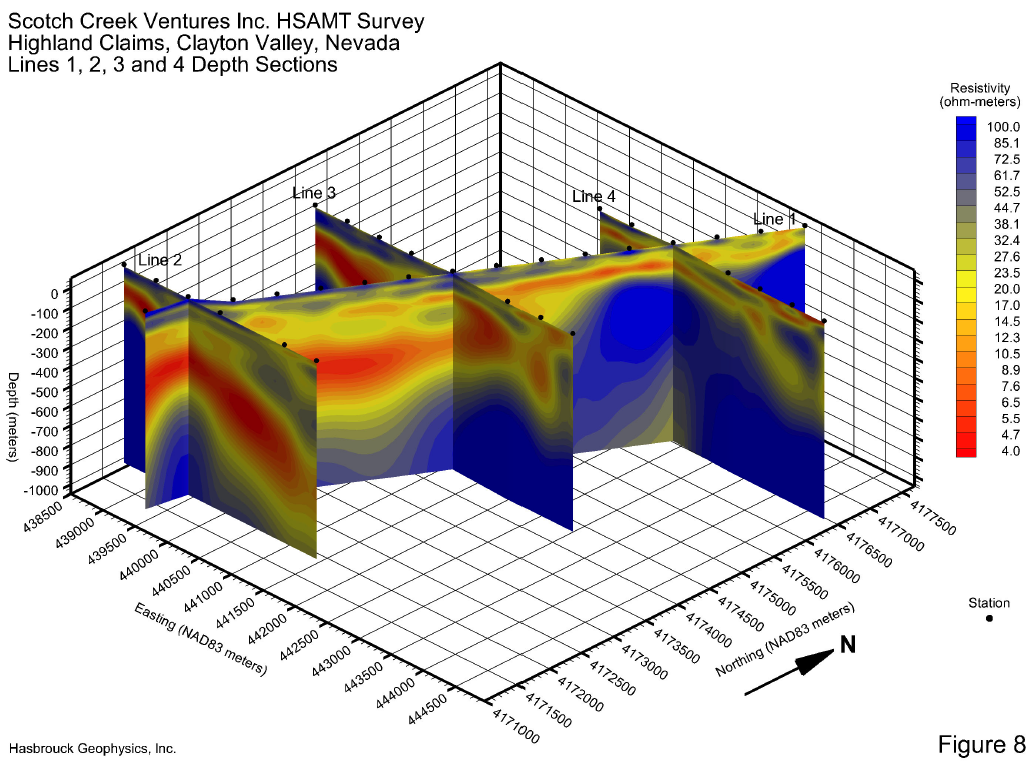 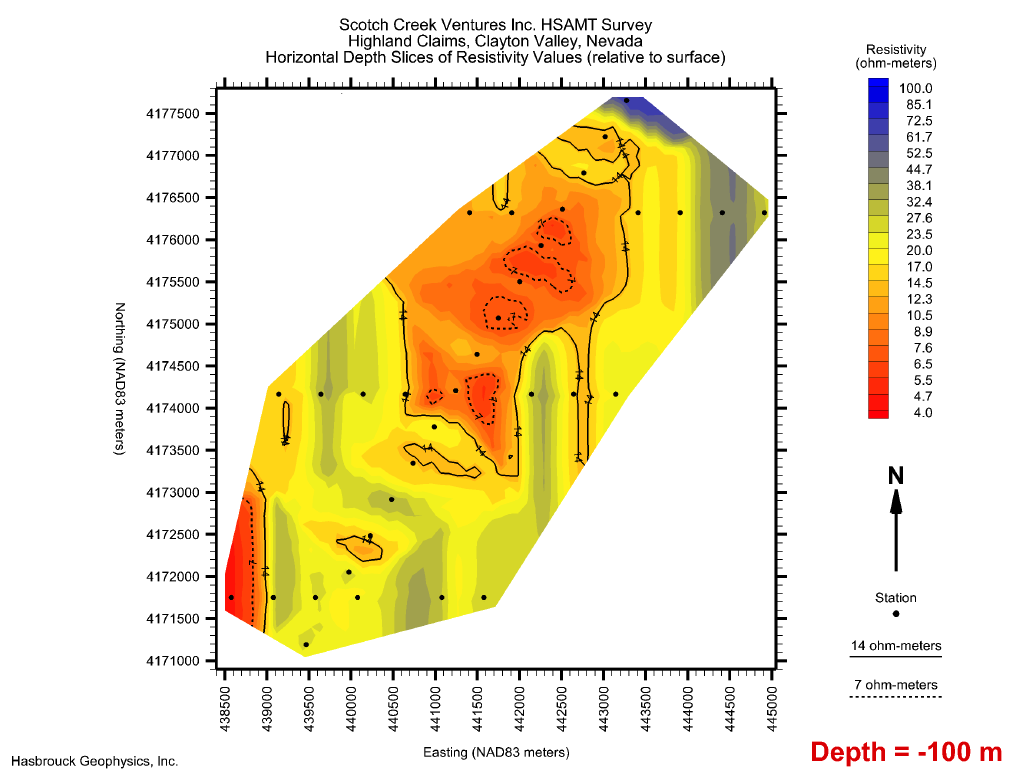